Historic Rand Tower Renovated from the Top Down

Aviator Rufus R. Rand would love the recently-renovated Rand Tower. He originally built the 26-story structure in 1929. Now, almost a century later, the historic building serves as a luxury hotel, again proudly taking its place on the downtown Minneapolis skyline.

Getting to this point took the dedicated effort of architects, contractors and building specialists. Working together, they transformed the former office tower into a luxury boutique Marriott hotel with 270 guest rooms. Rand Tower Hotel pays tribute to both the Art Deco style and Rand’s love of aviation. While in progress, all heads turned skyward to watch the upgrading of the tower’s many roofs.

“There are eight different roofs that had to be replaced on this structure,” says Mike Mehring, vice president of commercial sales with Central Roofing Company. “We worked on this project from April of 2019 through July of 2020. The different phases of work were all challenging.

“The revitalization of this building means a lot to everyone in our city. For our part, we gave it our absolute top attention.”

According to Brock Norman, Senior Project Manager with Ryan Companies, nothing about the scope of the roofing on the Rand Tower project was typical or normal.

“We hired Central Roofing because they weren’t afraid of the challenge,” says Norman. “Mike and his team worked with our pre-construction managers to essentially formulate the scope of work. They provided a plan and details on how to accomplish updating of the roofing levels from the 26th floor down to the 6th floor.

“Frankly, we needed an expert who was willing to help come up with a plan while keeping a mindful eye on the project budget. Central Roofing provided that for us.”

Simultaneously, the team at ESG Architects was also working closely with Ryan Companies to develop the roofing specifications and details for the renovation.

“A great deal of credit goes to the pre-construction team at Ryan Companies and Central Roofing for their on-site work in evaluating all existing conditions at each roof level that needed to be addressed,” says Terry Gruenhagen, AIA, LEED AP and principal at ESG Architects. “Based on our observations, the new roof system was installed in a high-quality manner.

“Special attention was paid to the rooftop addition and the waterproof membrane on the exterior roof terrace and interior bar area. We have a high degree of confidence that the roof system will protect the new hotel from water intrusion for many years to come.”

The Central Roofing team worked hard to instill that confidence. Because swing stages (otherwise known as suspended scaffolding) were used for most of the roofing work, all activities had to be precisely coordinated. Often the work was scheduled down to the minute or hour, instead of just for a particular day.

After installing anchors on the upper roof areas, the swings could be tied off. Multiple swings were installed around the building with each contractor taking turns on the stages. This mandated the eight roofs be completed in different phases.

“Making it through the challenges and coordination of completing the upper roofs is what I’m proudest of on this project,” says Mehring with Central Roofing.

Tackling the Project — One Roof at a Time

The roofing project started with the removal of a 15-year-old Sika® Sarnafil® roof on the highest roof of the building. Several rooftop unit curbs and fall protection anchors were then installed. At the same time, the Central Roofing team brought the roof membrane up to normal performance levels and worked on preventative maintenance for the roof.

At roof level 26, a ballasted EPDM roof covered with pavers was replaced with a Johns Manville 60 mil fully-adhered system. The pavers were reused to help protect the roof while trades people walked on it to perform mechanical equipment repairs.

As Mehring remembers, the roofing on levels 25, 24, 23, 21 and 3 were leaking profusely. “We came up with a plan to replace them with the same Johns Manville EPDM membrane we used on the top level,” says Mehring. “We took out the existing copper sheet metal roofing that was covered with a coating. Our solution with the 60 mil membrane system should keep the roof solid and leak-free.”

When it came to level 5 of the Rand Tower, life got even more interesting for the roofing team. The original roof on this level had an old TPO roofing membrane covering, and an even older BUR system. Central Roofing employees removed the roof to allow for new construction.

As Ryan Companies oversaw the project, a new rooftop dining area was constructed on level 5. A retractable skylight/roof was added, plus an outdoor patio. Central Roofing installed sheet metal within the retractable roof area to mask areas on the building walls with imperfections.

“Overall, this was an incredibly complicated project,” says Norman with Ryan Companies. “Almost all of Central’s work had to be done from swing stages. They did a terrific job of coordinating with multiple trades to make this project a success.”

Now open to the public, the Rand Tower Hotel welcomes guests with its Art Deco themes. The structure, on the National Register of Historic Places, has been renovated inside and out … from the top of the 26th floor down to the impressive aviation-themed lobby.

HISTORIC RAND TOWER RENOVATED FROM THE TOP DOWN 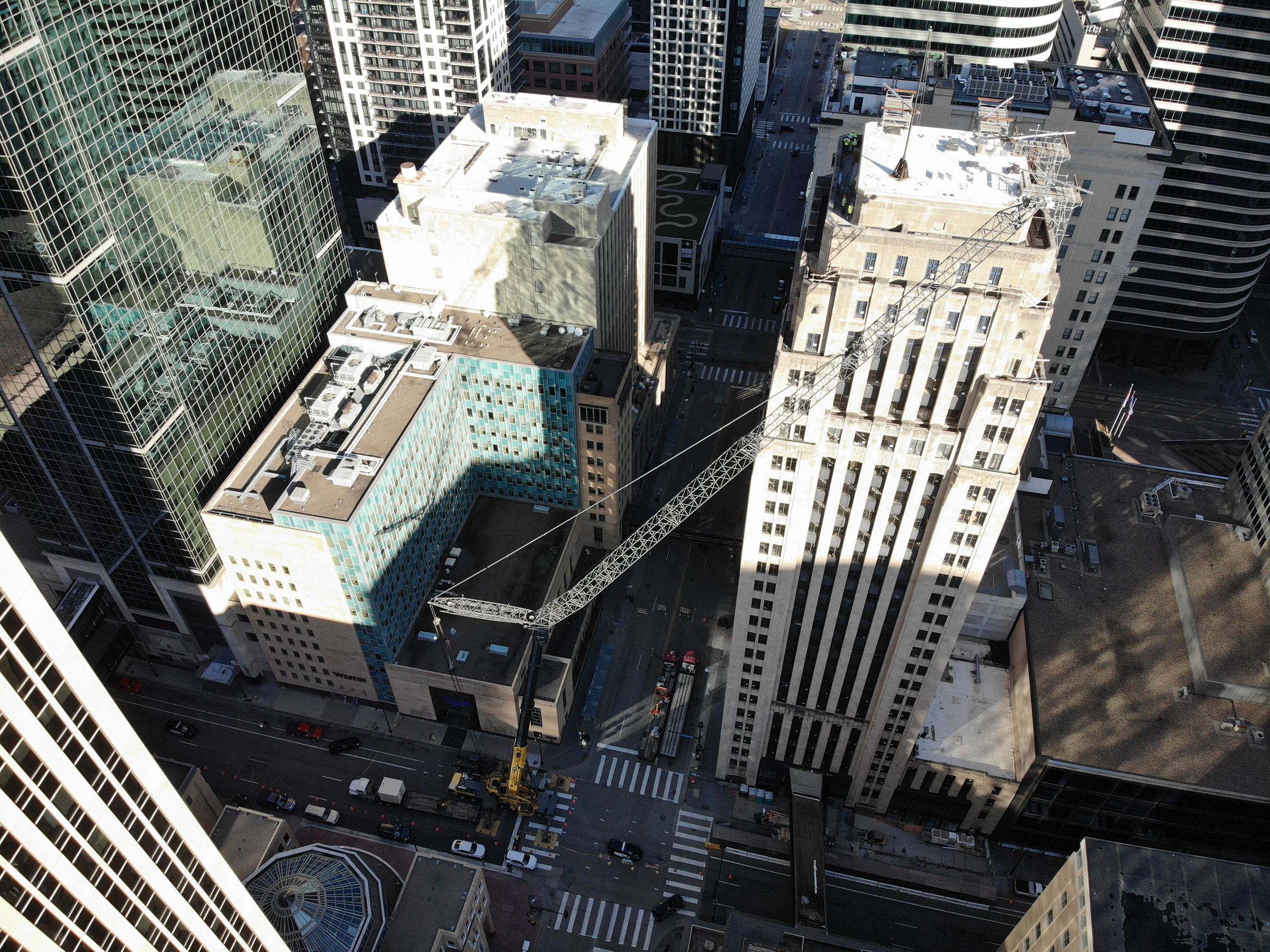